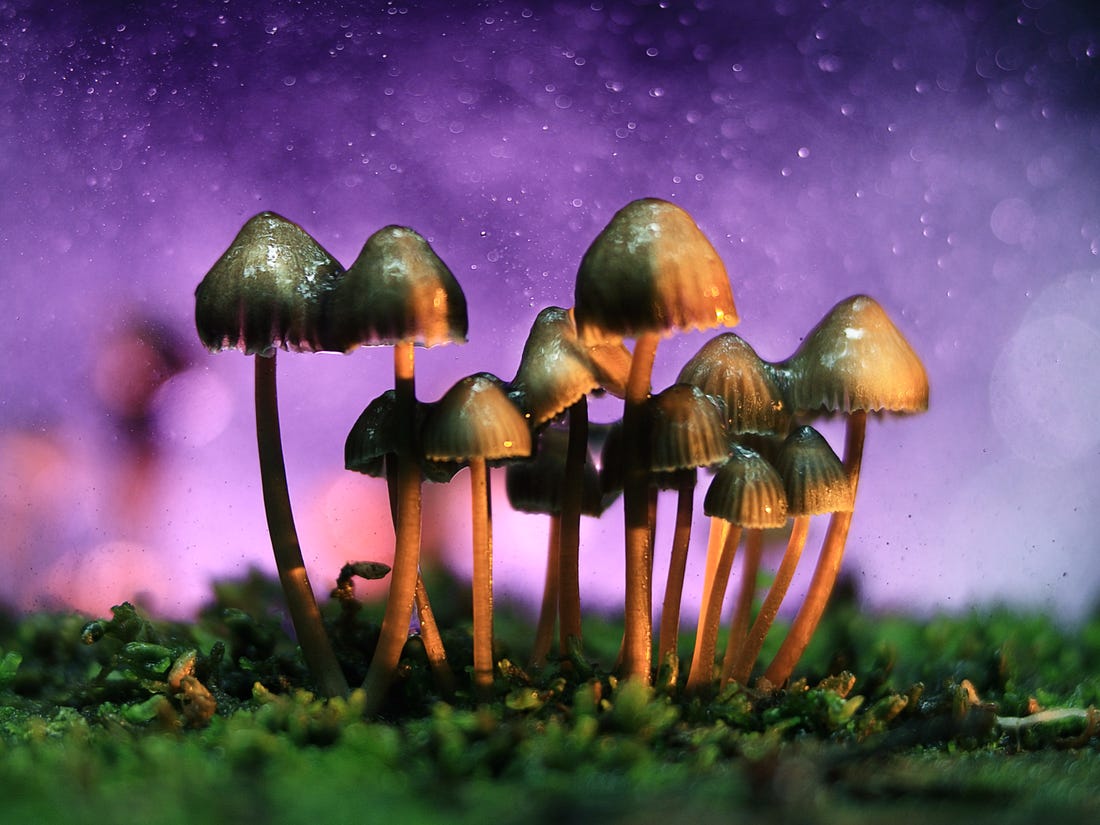 Admittedly, psychedelic drugs are not the type of drug you would expect your G.P to prescribe to you however, this may change in the future!

With the recent buzz and large investment focus recently made in CBD oil, it may not be too presumptuous to predict that psychedelic drugs might make the same waves. Surely, it would be better to buy from a legit medical clinic, rather than a shady guy named “The Wizard”, “Gandalf “or “Mr Green”, who hangs around in dark alleys and on the weekends picks recreational fungi from the fields. Moreover, could “Gandalf” really tell the difference between a Psilocybin (magic mushroom) and a death cap?

Recently, studies have explored the potential for psychedelic drugs to treat certain mental health conditions. Researchers have combined certain psychedelic drugs and talk therapy, which showed positive results. Of course, these studies are still in the early stages, so it’s a long way off before you can go to work tripping your nuts off.

An article provided by The New York Times showed that a large scale study is on the way to ascertain if MDMA, the active ingredient in the drug ecstasy, in combination with talk therapy can help sufferers of Post-traumatic Stress disorder (PTSD). Before MDMA can be approved as a prescribed drug, it needs to complete a final “phase 3” study, which includes a minimum of 230 people.

According to Alicia Danforth, a leading researcher at the Los Angeles Biomedical Research Institue, social anxiety is prevalent in adults who also suffer from autism. These individuals only have a few treatment options that have shown positive treatment results. Danforth reported, that the positive effects of using MDMA therapy lasted for months and even years for most of the research volunteers. However, Danforth did state that a larger study group is needed to provide more research into the benefits of talk therapy and MDMA for social anxiety in adults with autism.

A psilocybin mushroom, also known as magic mushroom, is one of a polyphyletic group of fungi that contain psilocybin and psilocin.

Recent studies have suggested that psilocybin could benefit cancer patients who suffer from depression or psychological stress. In 2016, a study involving 80 patients found that a single dose of psilocybin could dramatically reduce depression and anxiety felt by patients who were diagnosed with advanced or late-stage cancer, compared to those who took a placebo. Furthermore, results also recorded that 80% of the participants showed a reduction in depression and anxiety, which lasted for six months.

In another discussion at the APA symposium, it was found that 13 patients with life-threatening cancer who experienced anxiety and stress also responded well to the combination of psilocybin and talk therapy. In addition, the patients were able to cope better with loss and existential distress. The researchers also recorded that the patients seemed to develop a new understanding of dying.

Apparently, the participants also made some sort of spiritual connection during their experience. According to Gabby Agin-Liebes, “participants made spiritual or religious interpretations of their experience, and the psilocybin treatment helped facilitate a reconnection to life [and] greater mindfulness and presence and gave them more confidence when faced with cancer recurrence.” Gabby Agin-Liebes, is a doctoral candidate in psychology at Palo Alto University in California, who presented the study.

Ayahuasca, also known as the vine of the dead, is an entheogenic brew made out of Banisteriopsis Caapi vine (contains several alkaloids that act as monoamine oxidase inhibitors (MAOIs) and Psychotria Viridis (which contains the primary psychoactive, N, N-dimethyltryptamine (DMT). MAOIs are required for DMT to be orally active). Both of these ingredients have hallucinogenic properties. The brew is used as a traditional spiritual medicine in ceremonies among indigenous peoples and the Amazon basin. It has been claimed that the properties that make up these ingredients may provide anti-depressant effects.

There have been many studies into the benefit of taking ayahuasca for the treatment of depression. In an open-label trial, a single dose of ayahuasca was given to 17 patients with depression. The researches recorded results, using the Hamilton Depression Rating Scale (HAM-D) and the Montgomery–Åsberg Depression Rating Scale (MADRS). The results showed a significant reduction in depression severity within the first hours after dosing. These effects remained significant for 21 days (Osório et al., 2015; Sanches et al., 2016).

To conclude, it appears that more research needs to be done to really explore the benefits of psychedelic drugs for mental health disorders. Nevertheless, the results seem to be positive which is great news for mental health sufferers.

Of note, in an awesome podcast with Joe Rogan and Graham Hancock, they discuss the use and origins of ayahuasca. Mr Hancock is an extremely knowledgeable and charismatic best-selling author and lecturer specializing in ancient civilizations and monuments. Mr Rogan is a big advocate of DMT and other psychedelic drugs and has often spoken about his own life-changing experiences.

If you have a spare 2 hours and 45 minutes I would really recommend you watch the full podcast.

« Why is stretching important?
What to Eat to Build your Immune System to stay Safe from Coronavirus? »