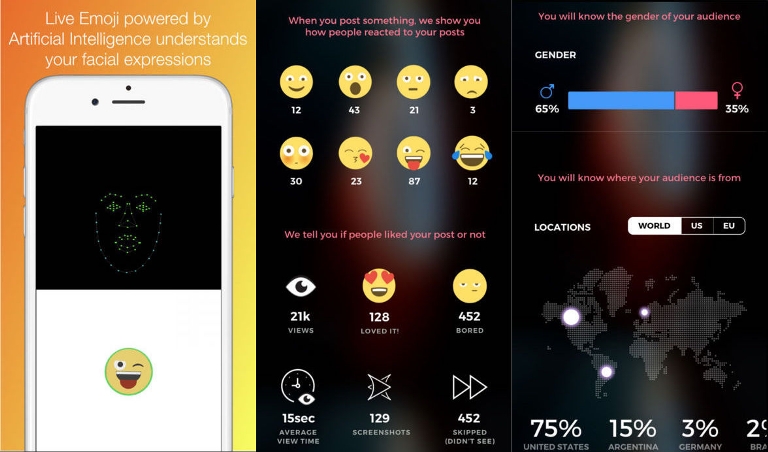 If you’re tired of using the same social media networks and are looking for a way to give new life to your digital self, Polygram is an app that promises to make your social media presence more exciting. Polygram is a new social network that includes many next level features to make your digital life exciting. The main feature of the new network is facial recognition, which uses a built-in system to recognize facial expressions and then sends emojis based on your precise expression.

Sounds interesting, right? People on social media networks love to send emojis to share what they’re feeling. Who wants to type when you could just send a cute emoji? Although thousands of emojis are available on different social media networks, you’d be hard pressed to find one that copies your exact expression. Polygram, however, boasts an advanced facial detection feature that reads facial movements and then creates tailored emojis accordingly. You can now animate your faces and use them as emojis!

That’s not all. Polygram also includes a bunch of other features related to photo sharing. The filters in the app are designed by real plastic surgeons, who have worked to create the types of filters that’ll make you look super attractive. Instead of adding useless elements to your photos, you can actually make yourself look prettier and more attractive. The app includes augmented reality makeup that’s sure to make you look superb. Who needs to put on heaps of makeup when all you need to do is take a selfie with Polygram?

Privacy is another concern for most social media users. If you would like to keep your photos private, Polygram includes a feature that hides your image behind a white snow-like cover. This is called the wipe-to-reveal feature. When you use it, people will not be able to view your photo easily. This way, you’ll keep your photos secure, as nobody would be able to take screenshots of your photos if you use this feature.

Currently, the app is only available for iOS. It’s being used by thousands of Apple users, who have left many reviews on the app store. No information has been released about when and if the company will launch an Android version. Here’s hoping the company will soon come out with an Android version. With the success of the app so far, we wouldn’t want Android users to miss out.