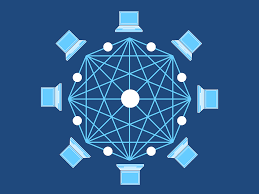 You may have heard the word “blockchain,” the record-keeping technology underpinning the Bitcoin network, if you’ve been following banking, investing, or cryptocurrencies for the previous 10 years.

What is blockchain technology?

Through the use of decentralization and cryptographic hashing, blockchain, also known as Distributed Ledger Technology (DLT), makes the history of any digital asset unalterable and visible.

Blockchain technology is defined as a decentralized, distributed ledger that records the provenance of a digital asset. By design, the data on a blockchain is unable to be modified, which makes it a legitimate disruptor for industries like payments, cybersecurity, and healthcare.

Blockchain is a particularly promising and revolutionary technology since it reduces risk, eliminates fraud, and provides transparency in a scalable manner for a wide range of applications.

Every chain is made up of many blocks, each of which contains three fundamental elements:

A nonce creates the cryptographic hash when the first block of a chain is produced. Unless it is mined, the data in the block is regarded as signed and eternally linked to the nonce and hash.

Mining is the process through which miners add new blocks to the chain.

Every block in a blockchain has its own unique nonce and hash, but it also refers to the hash of the preceding block in the chain, making mining a block difficult, particularly on big chains.

Miners utilize specialized software to solve the very difficult arithmetic issue of generating an approved hash using a nonce. Because the nonce is only 32 bits long and the hash is 256 bits long, there are about four billion nonce-hash combinations to mine before finding the proper one. Miners are considered to have discovered the “golden nonce” when this happens, and their block is added to the chain.

Making a change to any block earlier in the chain requires re-mining not just the block with the change, but all of the blocks that come after. This is why it’s extremely difficult to manipulate blockchain technology.

When a block is successfully mined, the change is accepted by all of the nodes on the network and the miner is rewarded financially.

Any type of electronic equipment that retains copies of the blockchain and keeps the network running is referred to as a node. Every node has its own copy of the blockchain, and in order for the chain to be updated, trusted, and validated, the network must algorithmically approve every freshly mined block.

Every action in the ledger can be easily reviewed and observed since blockchains are transparent. A unique alphanumeric identification number is assigned to each participant, which is used to track their transactions.

The blockchain’s integrity is maintained and users’ confidence is built by combining public data with a system of checks and balances. In essence, blockchains may be regarded as the technological scaling of trust.

This is merely scratching the surface of what blockchain technology is and what it entails. Watch out for more articles coming your way regarding the technology to learn more about this revolutionary concept that you’ll likely hear of more in the future.

« Going nuts for nuts: Why you should switch out that bag of chips for nuts
How to talk to your pre-teen about work and career »